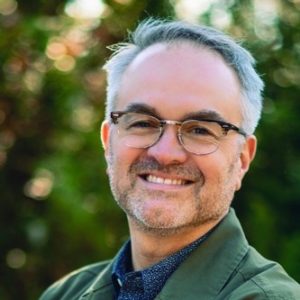 Corey B. Smith [he/him] is Senior Director, Diversity, Equity, Inclusion [DEI] & Accessibility at NIKE, Inc. He oversees DEI for global operations & logistics, as well as all of Nike’s corporate functions. Corey graduated with a B.A. in Organizational Leadership from Bethel University in St. Paul, Minnesota.

While driving cross-country from California to Minnesota in Spring of 2001, he and his partner realized Laramie, WY was the next exit. Even though Matt’s murder occurred three years earlier, and they were exhausted, they were terrified to spend the night in Laramie. Once in MN, Corey researched Matt’s story and hosted Judy as a keynote for the LGBTQ employee resource group. Her story changed his life.

Since then, he’s been a critical driver of LGBTQ rights and DEI strategies for Nike, Target, Levi Strauss & Co., Best Buy, and PetSmart. He’s volunteered for the Matthew Shepard Foundation, and has been active with the Human Rights Campaign [HRC] as a board member, and currently as a member of the Business Advisory Council. He received the Matthew Shepard Foundation’s Essential Piece Award in 2012, and was a two-time gala dinner co-chair for HRC.

Corey grew up in the Midwest, and now lives in Oregon with his husband, Jason. He tries to keep up with his daughter Aurora, and defiant pug, Violet.