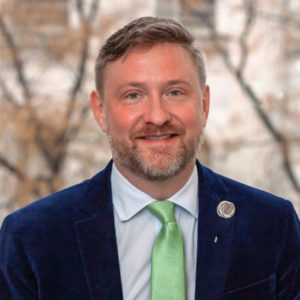 Jason Marsden has served as Executive Vice President of the Matthew Shepard Foundation since 2009. During his seven-year career as a Casper (Wyoming) Star-Tribune reporter, the 1998 murder of Matthew Shepard, a personal friend, impelled Jason to come out publicly in the newspaper’s pages and begin speaking to journalism conferences and schools nationwide about coverage of hate crimes. In 2001, he became the founding executive director of Wyoming Conservation Voters and the WCV Education Fund, a pair of educational and lobbying organizations for wildlife and environmental conservation. He is a former member of the boards of directors of the Alliance for Historic Wyoming, the Wyoming Wilderness Association and the Wyoming Chapter of the Sierra Club, and currently serves on the boards of the Equality State Policy Center and the Governor’s Residence Preservation Fund. He was appointed in 2016 by Denver Mayor Michael Hancock to the city’s LGBTQ Commission and serves as co-chair of its Public Safety Committee. Jason and his husband live in Denver.

As one of our expert speakers, Jason offers unique presentations targeting one of three key topic areas:

To schedule a virtual presentation for your corporation or civic organization, contact Allison Down at Allison@matthewshepard.org.