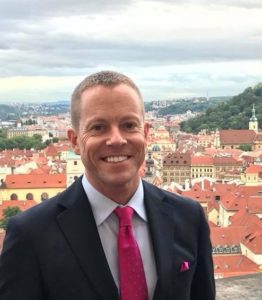 EVP of Outreach and Operations

Jeff Mack is the Matthew Shepard Foundation’s Executive Vice President of Outreach and Operations.  He oversees the daily operations of the Foundation and is responsible for the mission-driven programmatic management of the organization.  He was born in Chugwater, Wyoming and attended the University of Wyoming, where he received a BS in Political Science.  After graduating he became an admissions counselor and member of the LGBTQ+ group on campus, where he met Matthew Shepard.

Matt’s death inspired Jeff to live a career of service to non-profits, and he has used his fundraising and leadership skills to positively impact a number of LGBTQ+ organizations.  Jeff has held positions with the Human Rights Campaign, Outfest, Point Foundation, Red Cross, and the Kennedy Center. He comes to us from the University of Illinois Chicago, where he was Assistant Dean and Chief Advancement Officer for the College of Architecture, Design, and the Arts.

Jeff is thrilled to return to Denver and carry-on Matt’s legacy.  When he isn’t working, Jeff loves to travel and eat churros! His pride and joy are his four cats Piper, Oliver, Carter, and Trouble (aka Grandma). Contact Jeff at jeff@matthewshepard.org.