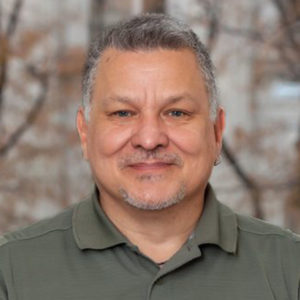 Louis’s connection to the Foundation goes back to its beginnings: he edited two local LGBTQ magazines and published stories about Matt’s murder and about the creation of the Foundation. After attending a few Bear to Make a Difference events as a media sponsor, he began volunteering for the Foundation.

Louis retired after 33 years teaching high school English in the western suburbs of Denver. He was a Gay-Straight Alliance sponsor for the latter two decades of his career. He also served on various committees in the school district’s Office of Diversity and Inclusion, representing LGBTQ employees and advocating for minority student populations, especially LGBTQ and Latino students. Likewise, he served as a minority advocate at the local, state and national levels of the National Education Association, and is on the board of the NEA Hispanic Caucus. Now, as part-time Legacy Project Coordinator, Louis brings his experience with classroom teaching, curricula and diversity work to the Foundation’s supported “legacy works,” to widen their impact in bringing Matt’s story to new audiences and readers.

Louis holds a BA in English from Gonzaga University and an MA in Liberal Education from the great books-based Graduate Institute of St. John’s College, Santa Fe. He lives in the foothills above Denver with two crazy rescue dogs and a tolerant old cat. Contact Louis at louis@matthewshepard.org.