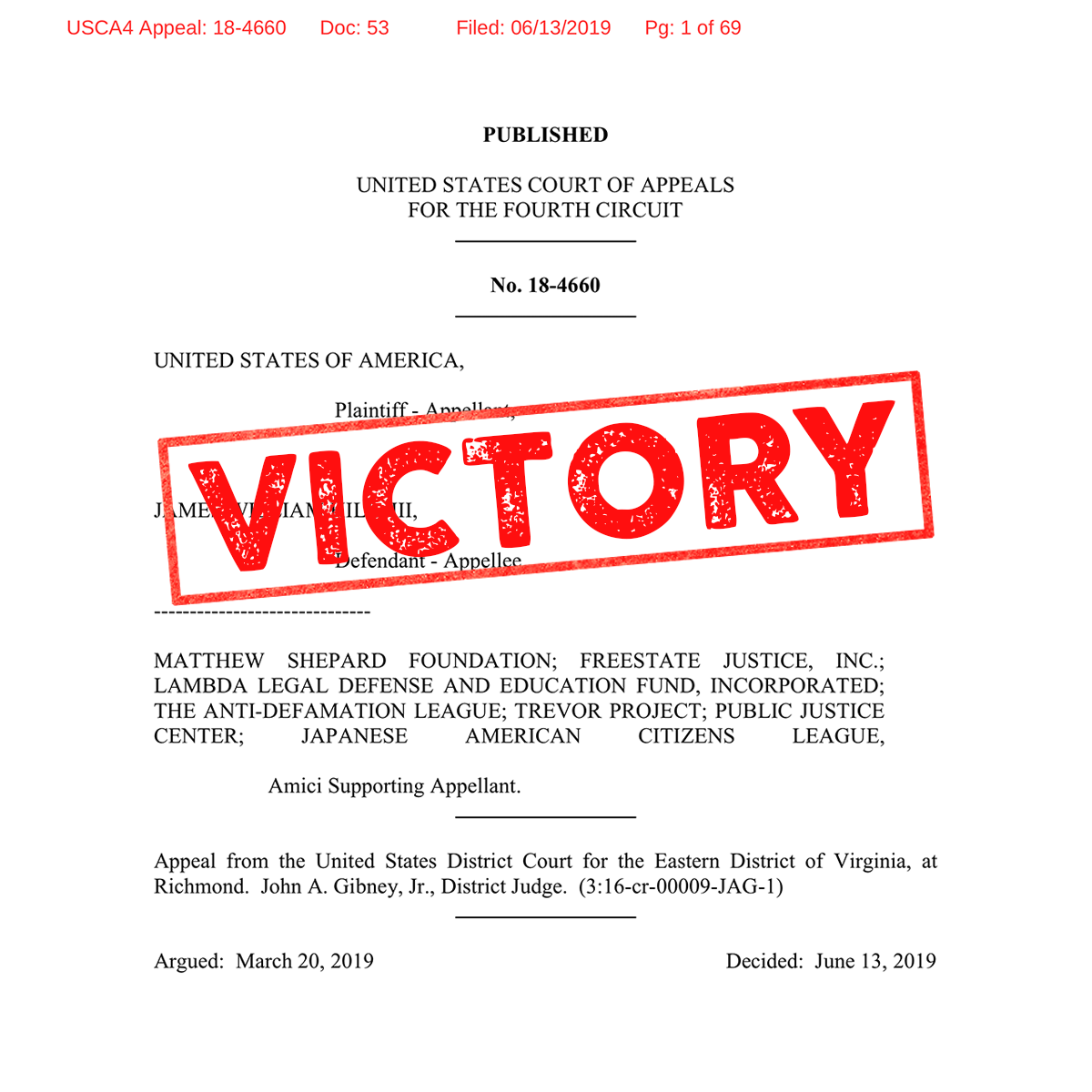 The federal Hate Crimes Prevention Act conviction of an Amazon employee who expressed his hatred for homosexual individuals by punching a gay co-worker was upheld by the Fourth Circuit June 13.

Congress adopted the Hate Crimes Act under its commerce clause authority. But James Hill argued that the statute was unconstitutional as applied to him, because he didn’t affect interstate commerce when he came up behind Curtis Tibbs, who was carrying items to be packaged and shipped, and punched him multiple times in the face.

But the U.S. Court of Appeals for the Fourth Circuit said Tibbs was preparing packages for shipment in interstate commerce at the time of the attack. Just as Congress may regulate an economic or commercial activity under the commerce clause, it may regulate violent conduct that interferes with or affects that activity, it said. In reaching its conclusion, the opinion by Judge James A. Wynn Jr. applied U.S. Supreme Court precedent for prosecutions under the Hobbs Act and the federal arson statute, which use similar language to the Hate Crimes Act.

The Commonwealth of Virginia doesn’t recognize violence based on sexual orientation as a hate crime, only crimes based on race, religion, national origin, or color, according to the ruling. It was because of the fact that Tibbs was preparing packages for interstate sale at an Amazon warehouse that the case was referred to a federal court.

Referring the case to higher court federalizes crimes that should be handled on a state or local level, Freedom of Conscience Defense Fund Executive Director Daniel Piedra said in an email.

“The broad definition of interstate commerce essentially leaves nothing beyond the federal government’s authority. While the facts of this case are tragic, they don’t justify allowing Congress to do whatever it wants in the name of preventing ‘hate,’” he said.

“The tortured legal rationale that a literal attack on a worker shipping merchandise across state lines was somehow not ‘interstate commerce’ deserved to be quashed and we are relieved it was, on behalf of the unprecedented number of hate crime victims in our country today,” he said in an email.

“If this is not interstate commerce, I don’t know what is,” she said. “Had the court found otherwise, it truly would have been a constrained definition of what we can do with the commerce clause.”

‘Without Provocation or Warning’

The assault was “without provocation or warning,” the ruling said.

The federal Hate Crimes Prevention Act “was passed not just to enhance the sentences for those that engage in violence, but also to deter that violence,” Lambda Legal senior attorney Omar Gonzalez-Pagan said. Lambda Legal filed a friend-of-the-court brief in the case. “We are pleased to have had the court uphold the constitutionality of that act.”

Though the case doesn’t directly relate to safety and health regulations, Amazon recently hired Heather MacDougall, former chair of the Occupational Safety and Health Review Commission, to oversee the company’s employee health and safety initiatives. Those initiatives could theoretically include policies related to workplace violence.

“They simply end up punishing people twice—once for the underlying criminal act, in this case assault and battery. Then they punish thoughts, not actions, as separate crimes,” Focus on the Family Chief Legal Analyst Bruce Hausknecht said in an email.

The laws foster a “victim culture,” he said. “They elevate politically popular classes of people to protected status and create political fights within minority communities competing as to who should be ‘added’ to the list.”

An Amazon spokeswoman said the company has a “zero tolerance policy on any kind of harassment or discrimination and we are appalled at the behavior of this terminated individual.”

“We cooperated with the law enforcement authorities during their investigation to ensure that all the important information was gathered,” she said. “We’re committed to ensuring that all of our colleagues feel safe, valued, and supported in the workplace.”

The Justice Department, which brought the case, is “pleased” with the ruling “and is reviewing” it, a spokesperson said in an email.