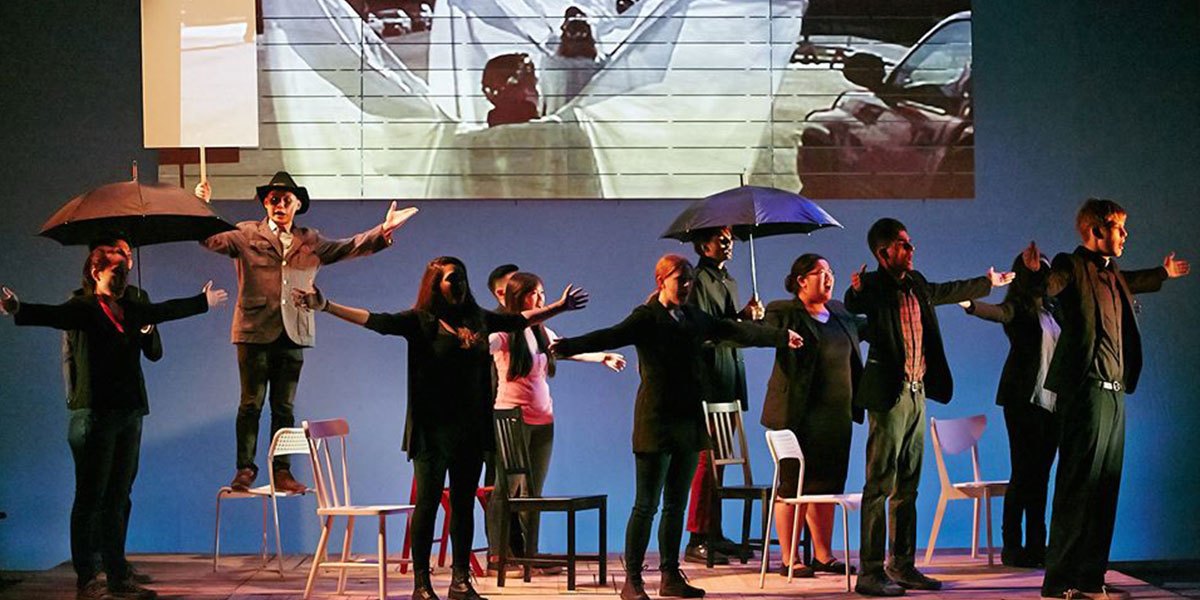 My Time at Rolling Meadows: Audiences, Actors and Attitudes

The Chicagoland suburb of Rolling Meadows was the scene of a production of The Laramie Project at the High School this past weekend. After a rather wild trip that included frozen planes and lost suitcases, I was privileged to join them Friday and Saturday to facilitate post-show discussions with the audience and cast. Although it was predominantly a positive experience, there seemed to be undercurrents of distance and avoidance.

During those discussions we heard some moving stories including a boy who had recently come out and was supported by the cast and crew, and a gay man who read about the production in the Windy City Times and drove out from the city in the winter weather to see it. He characterized himself as a quiet person, who was moved to speak about how important the experience was for him.

The intersection with religion was also a prevailing theme, including an elderly lady who quietly quoted the Bible about loving one another; a Methodist minister with a congregant in the show, who spoke eloquently about gentility and the dangers of generalities; and a Catholic youth leader who was also there to support students in the show. This shows a stark contrast to the absent Westboro Baptist Church which, despite a now- ubiquitous and very-rarely realized threat of picketing, failed to materialize with their signs in the snow and cold of the evening.

The student actors also spoke of their experiences in performing in the play, emphasizing their by-and-large support from their peers and a sense of realization that The Laramie Project was also a play about discrimination of all types.

These are the types of stories and experiences, questions and discussions that we are able to spark during my interactions with audiences and casts during these discussions. Relating the issues of the play to your personal experience is one thing; to be able to share and discuss with others brings a deeper level of involvement and investment with the community as a whole.

Still, throughout the trip I felt some were detached from the play’s point that hate crimes can and do happen in every city. There seemed to be some “we don’t have that problem here” attitudes that are unfortunately not uncommon in many communities in which the play is performed, almost as if there was a willingness to accept that hate exists in a wider sense but not within their own community. This was a far cry from reality as it was a personal experience with a hate incident that spurred Paul Dombrowski to be the driving force behind getting this production up and going. There was also reluctance to bring me into the actual classroom to offer historical and personal perspective on the crime although the text of The Laramie Project was being taught there, and I found that troubling.

Kudos to Paul Dombrowski for his passionate work, including inviting the GSA and Pride Youth groups who offered information tables and refreshments. Special thanks as well to Doug Sanborn from the MSF Board of Directors for joining us on Friday with his insights and comments.

During this trip I also had the chance to meet with director Diane McFarlin and three of her cast members who recently produced The Laramie Project at nearby Kaneland High School. We had a long and productive talk about their experiences with the show as well.

Every time I have a chance to interact with blend of directors, casts, and audiences within their own community I am struck by voices of passion to create change and bring fresh voices to the discussion. Sometimes it’s a single voice; sometimes it’s a chorus. But it’s always there.