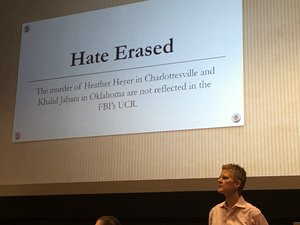 “For the impact you make today has a powerful rippling effect on every tomorrow.” – Anonymous

Traveling the country leading hate crime trainings for police and prosecutors, Cynthia Deitle has heard from all the skeptics.

“Laws are already in place for crimes, so it’s a waste of time and resources to add an extra charge for bias.”

“Look at the data! Hate crimes aren’t a major problem in our area.”

“Why do we need laws to protect certain people? And why are they more special than anyone else?”

Cynthia is the Programs and Operations Director for the Matthew Shepard Foundation, but for 21 years previously she was a leading FBI agent investigating some of America’s most tragic civil rights cases. She’s developed patient, painstaking and data-driven answers to these and other common misconceptions about hate crimes.

Once in a while, though, she delivers a training worth reflecting on and celebrating – when her trainees just plain “get it.”

For Durham, NH Chief of Police Dave Kurz, Cynthia’s recent hate crimes training was no mere exercise in political correctness – but instead, a powerful impetus for lasting improvement.

“We were ecstatic to have this training brought to the University of New Hampshire [and the] Durham community to enhance our capacity in the investigation of bias events,” Kurz told Cynthia. “My concern as police chief is that our officers may investigate a rock through a window as a criminal investigation, but with their exposure to the training, they have the capacity to look further to ensure that there is no bias motivation behind the seemingly benign event.”

As with many departments who seek out this specialized training, the University of New Hampshire Police Chief, Paul Dean, saw the racial unrest of 2017 as an opportunity to be more responsive to bias motivated incidents throughout the city. READ MORE on UNH >>

The training, offered by the Matthew Shepard Foundation in partnership with The Lawyers’ Committee for Civil Rights Under Law, gives officers a better understanding of state and federal laws related to bias motivated crimes, while training them on how to investigate and accurately report such crimes to the FBI.

“Often times when a training is provided, the instructors leave and in the aftermath hope that they may have imparted some insight to the participants. This training truly left an impression with one of our sergeants, which has already led to positive changes at the policy level,” said Chief Kurz.

At the conclusion of the training, it was recommended that the Durham Police Department update their policy to include wording that directs officers to complete a report when any bias or hate crime is reported, regardless of whether it rises to the level of a crime. In addition, it is now mandatory that ALL reported incidents related to hate crimes be investigated and documented.

“We at the Matthew Shepard Foundation are so grateful that our training hit home with the officers of the Durham Police Department,” added Deitle. “The implementation of this policy is a positive change that will increase their overall hate crimes enforcement.”

Taking the lessons from the training and putting them into action is where the impact begins in efforts to eliminate hate crimes. “As the policing environment evolves, it is critical that our staff remain aware that the best of community is diversity,” emphasized Chief Kurz, “and we must remain cognizant of the nuances of that diversity!”