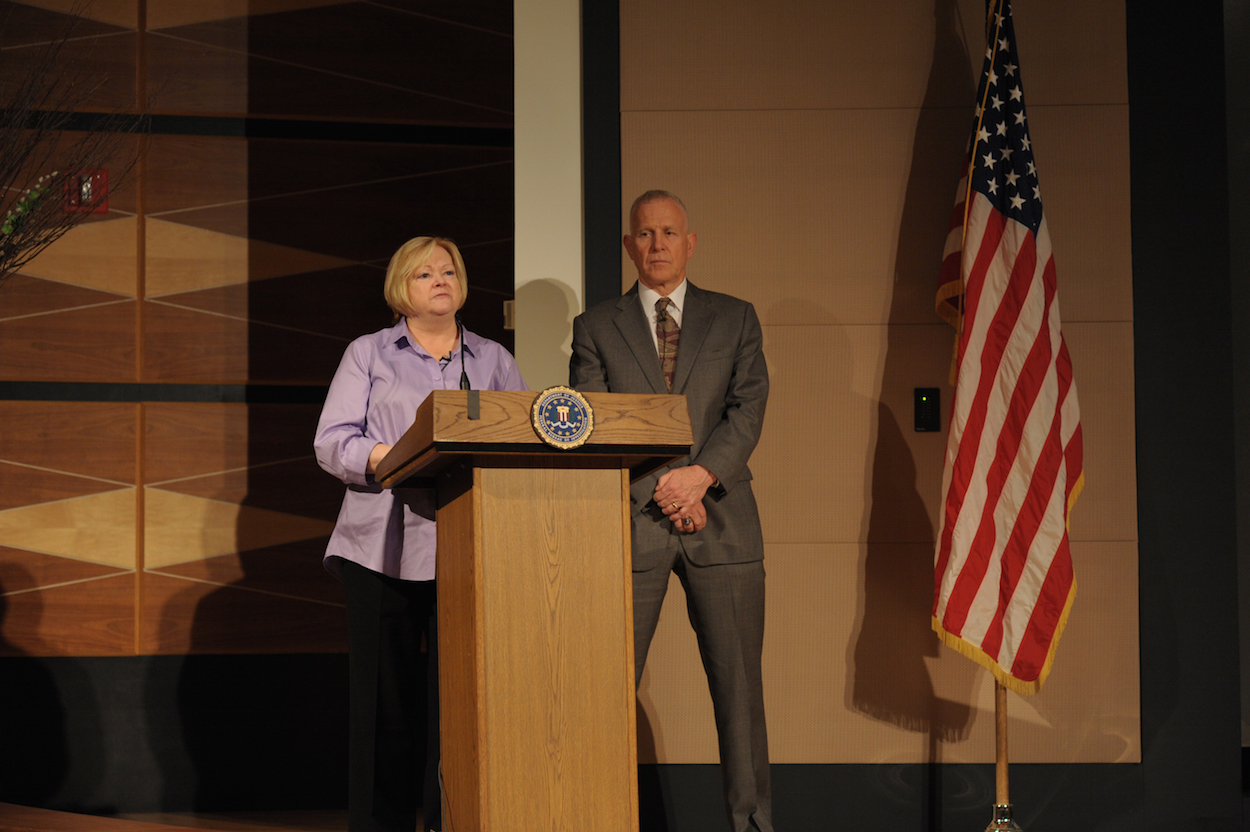 Violence against the LGBTQ+ community didn’t begin or end with Matthew Shepard. In fact, in huge portions of America, properly identifying, reporting and prosecuting these heinous crimes hasn’t even begun — despite the 2009 passage of the Shepard-Byrd Act. Matthew’s story, and the Foundation’s work to Erase Hate, are—unfortunately—still critical in coming to terms with the roots of violence against our community.

On September 28, Judy and Dennis Shepard, along with Dave O’Malley, the lead investigator into Matthew’s murder in Laramie, Wyo. in 1998 and now sheriff of Albany County, Wyoming, joined the Federal Bureau of Investigation’s Criminal Justice Information Services (CJIS) to urge better hate crimes reporting and to spotlight the distressing lack of basic information about this epidemic of violence.

Their presentation coincided with the FBI’s release of 2014 Uniform Crime Report (UCR) statistics, with specific statistics regarding hate crimes still to be released this November.

With an audience of more than 300 FBI agents, the Shepards and O’Malley reinforced the importance of the Matthew Shepard and James Byrd, Jr. Hate Crimes Prevention Act, a long-sought and hard-won bill that brought sexual orientation and gender identity into the federal hate crimes law. It is still entirely voluntary for local law enforcement agencies to collect and report hate crimes totals; more than 85 cities with over 100,000 people do not do so, part of the one-third of all agencies nationwide that fail to track these crimes.

Facing this enormous gap, Judy and Dennis delivered an essential message: that officials must not overlook the shattered lives behind these fragments of information.

“Your numbers are about real people,” Judy said. “And they help people resolve real problems in their lives.”

In addition to the Shepards’ well-received message, FBI Director James Comey encouraged CJIS officials to participate in the new National Incident-Based Reporting System (NIBRS), which was “created to improve the quantity and quality of crime data collected by law enforcement by capturing more detailed information on each single crime occurrence.”

Compared to the UCR Summary Report, the NIBRS contains more specific reporting classifications, such as differentiation between Crimes Against People and Crimes Against Property, and an expanded list of offenses ranging anywhere from aggravated or sexual assault, to vandalism. A more detailed reporting and data collection system is crucial to hate crimes reporting initiatives, given the vast variety of hate crimes committed. The violence—often brutal and fatal—against the LGBTQ+ community is frequent and rampant, but expressions of hate are not limited to these acts. We see everything from spray-painted racial epithets on walls to vandalism and property destruction of same-sex families’ homes, all deliberate “non-violent” acts designed to instill fear and a feeling of being “unwelcome” in a community. These crimes, though luckily enough free of casualties, pose much the same threat as those that do.

Both during his presentation and coverage of the event, Dennis Shepard reminded others that this is not about putting gay rights front and center—because there is “no such thing.”

“There is no such thing as gay rights. They’re not special rights. They’re equal rights for all citizens of this country,” he said. “I get so frustrated [when people] try and make it out that the gay community is getting something that no one else has.”

Proper hate crimes reporting and data collection is an important step toward identifying how to address the hate that lives in our communities. The Shepards’ visits with law enforcement agencies across the country is crucial to creating a more educated police force and helping foster better relationships between law enforcement and marginalized groups.

All photos courtesy of the FBI CJIS Division.