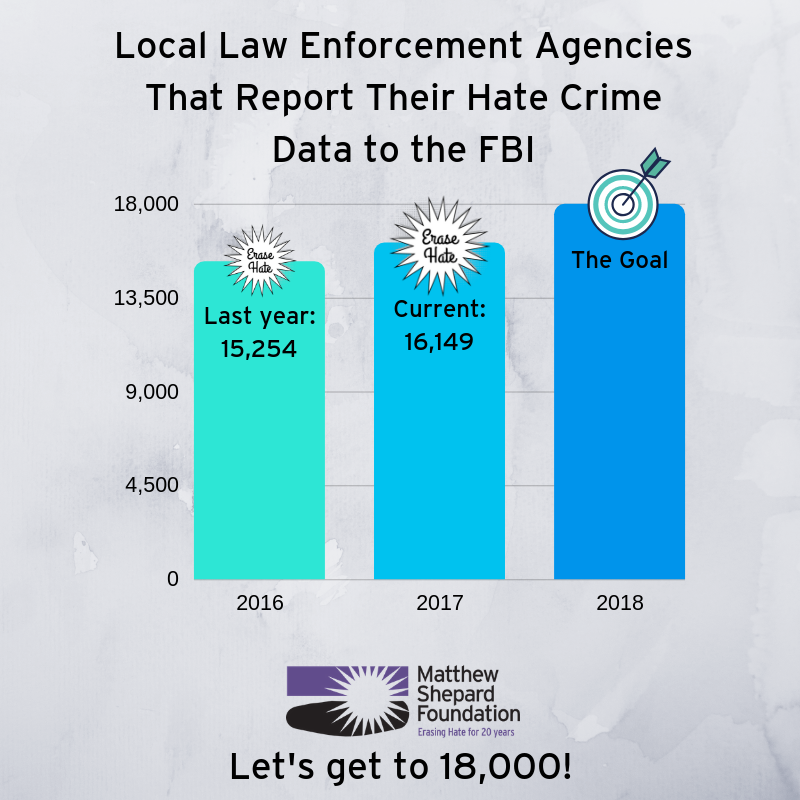 Earlier today, the FBI released Hate Crimes data for 2017, and for the third year in a row, these crimes have increased. According to the Department of Justice, hate crimes have risen 17% with a sharp increase in anti-Semitic cases in 2017.

However, one increase we are happy to see in this report is that 16,149 law enforcement agencies did their due diligence of reporting hate crimes in 2017, which is up from 15,254 agencies in 2016. While we thank the Department of Justice for continuing to serve and protect, we hope that they’ll join us in reaching our goal of encouraging all 18,000 agencies to report these horrific crimes, especially those in jurisdictions with over 100,000 citizens. From Corpus Christi to Tallahassee, and Winston-Salem to Savannah, 87% of U.S. cities reported zero hate crimes — a statistical impossibility — or didn’t file a report at all (a procedural failure). Together, we can do better.

One of the many programs here at the Matthew Shepard Foundation is led by former FBI Special Agent Cynthia Deitle, who also oversaw the civil rights division of the FBI for over a decade. Cynthia has been traveling to numerous cities where law enforcement needs this type of training. Whether it’s a jurisdiction that reports zero year after year and needs to be trained on how to identify a hate crime or a city that reports many hate crimes year after year, we are prepared to train both law enforcement and citizens, alike.

Hatred has been given a voice and an opportunity in America and we are working diligently to combat it. We won’t stop working on our mission to erase hate and hope you are with us. We need to educate folks in order to encourage better reporting by both citizens and law enforcement. Without complete data, we can only make educated guesses about where we need to be to do this work.

Today, we are working towards raising $5,000 which would pay for one of Cynthia’s trainings in a city that desperately needs our help.

Will you chip in today to help us meet that goal?

We are forever grateful for your support in this fight towards erasing hate in America and beyond.