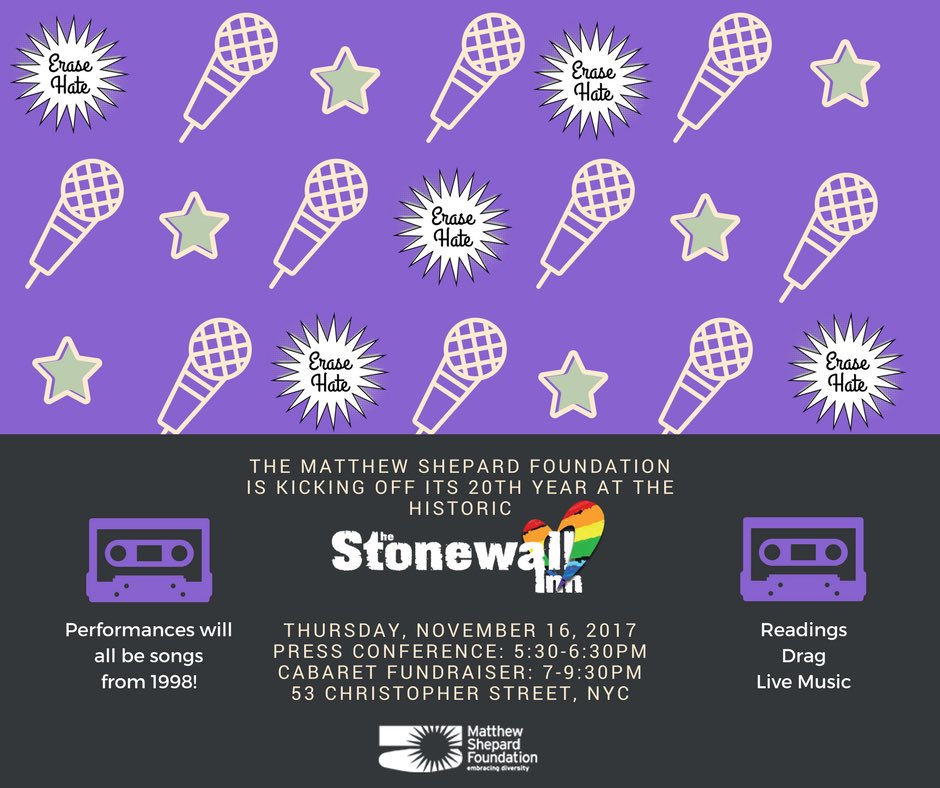 FOR IMMEDIATE RELEASE: New York, NY — The Matthew Shepard Foundation and the onePULSE Foundation will officially be partnering to raise awareness and effect change in relation to hate crimes, gun violence, and how they affect the LGBTQ+ communities and society in general. The partnership will include a month-long production next year in Orlando of The Laramie Project–the play about Matthew Shepard’s death–written by Moises Kaufman and the Tectonic Theater Project. The two foundations will also hold a celebrity fundraiser and reading of the play on Saturday, June 2, 2018.

Both foundations will be addressing this partnership at the Matthew Shepard Foundation’s 20th anniversary kick-off at Stonewall on November 16th.

“We’re thrilled to be in New York. Holding this event at the historic Stonewall Inn is even more meaningful than ever. The work that began there almost 50 years ago is paramount to the work we are doing today. If not for the riots, we may not have even had a voice for Matthew in 1998,” said Joshua Anderson, the Matthew Shepard Foundation’s Development Director.

“Every day, it becomes even more clear that something has to change. The increase in mass shootings, hate crimes, including those targeting the LGBTQ + community and a lack of legislative action, has put the responsibility of foundations like ours to collaborate and work together to help the intersection of these causes,” said Barbara Poma, Executive Director of the onePULSE Foundation Inc.

Judy and Dennis Shepard, the parents of Matthew Shepard–whose brutal and homophobic murder was the impetus for the Matthew Shepard Foundation as well as the Hate Crimes Prevention Act–will be speaking during the media portion of the event. Leah Shepherd and Sara Brady from the onePULSE Foundation will also be there to comment on the partnership.

Tickets and more information about the kick-off at Stonewall can be found here.

The Matthew Shepard Foundation’s longstanding mission is to erase hate by replacing it with understanding, compassion and acceptance. Through local, regional and national outreach, we empower individuals to find their voice to create change and challenge communities to identify and address hate that lives within their schools, neighborhoods and homes.

The onePULSE Foundation is a 501(c)(3) incorporated by the owners of Pulse Nightclub. The onePULSE Foundation was established to create a sanctuary of hope around this tragic day in American history – Sunday, June 12, 2016 – to honor the 49 lives that were taken, the 68 injured victims, the affected survivors and the first responders and healthcare professionals who cared for the victims.This fund is intended to support construction and maintenance of the memorial, community grants to care for the survivors and victims’ families, endowed scholarships for each of the 49 angels, and ultimately a museum showcasing historic artifacts and stories from the event. All donations will be used for the construction and operation of the official memorial and museum, community grants and educational scholarships.​ This is a defining mission and healing initiative that we hope inspires supporters who share our vision and understand the sacred responsibility to which we have been entrusted.