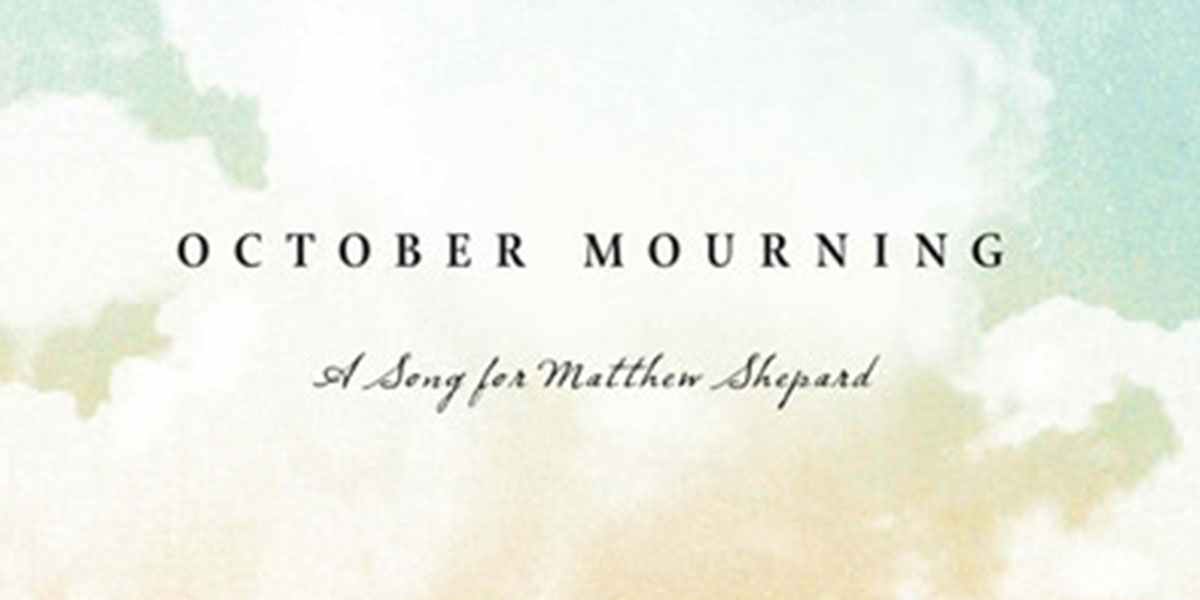 By Lesléa Newman for HuffingtonPost.com

Writing October Mourning: A Song for Matthew Shepard has been a long journey, one that took me over 11 years and began with a terrible coincidence.

My journey began Oct. 12, 1998, the day I flew across the country to give a speech about the controversy over my children’s book Heather Has Two Mommies at the University of Wyoming, in celebration of National Coming Out Day. That was the day the world found out about the brutal murder of Matthew Shepard, the gay Wyoming college student killed in the most visible anti-gay hate crime in American history.

I imagined Matt Shepard, whose picture had been splashed all over the newspapers, sitting in the front row for my speech. I knew he had planned on coming to my lecture. I knew he had attended a meeting of the school’s Lesbian, Gay, Bisexual, Transgender Association to finish planning Gay Awareness Week the night he was attacked. I knew he had been robbed, kidnapped, beaten, and tied to a fence, where he remained undiscovered for 18 hours, all because he was gay.

That night I promised the people attending my lecture that I would do my best to make sure Matt was not forgotten. To this day, I open all my speeches on LGBT rights by honoring Matt’s memory. I tucked a photo of Matt inside my wallet, which I still carry with me wherever I go. I attended a lecture given by Judy Shepard at the University of Massachusetts, and afterwards I went backstage to greet her. Though I never met Matt, he has become an important part of my life, as he has for so many others.

In 2008 something happened that made October Mourning possible: I was appointed poet laureate of Northampton, Mass. This honor inspired me to focus fully on my first literary love, which has always been poetry. In the fall of 2009, I created a project called “30 Poems in 30 Days,” inviting the poets of my community to write one poem a day during the month of November, to raise money for a local literacy organization.

And on Oct. 12, 2009, the 11th anniversary of Matt Shepard’s death, something else happened that was crucial to the writing of my book: the play The Laramie Project: Ten Years Later (An Epilogue) premiered in 100 cities, including Northampton.