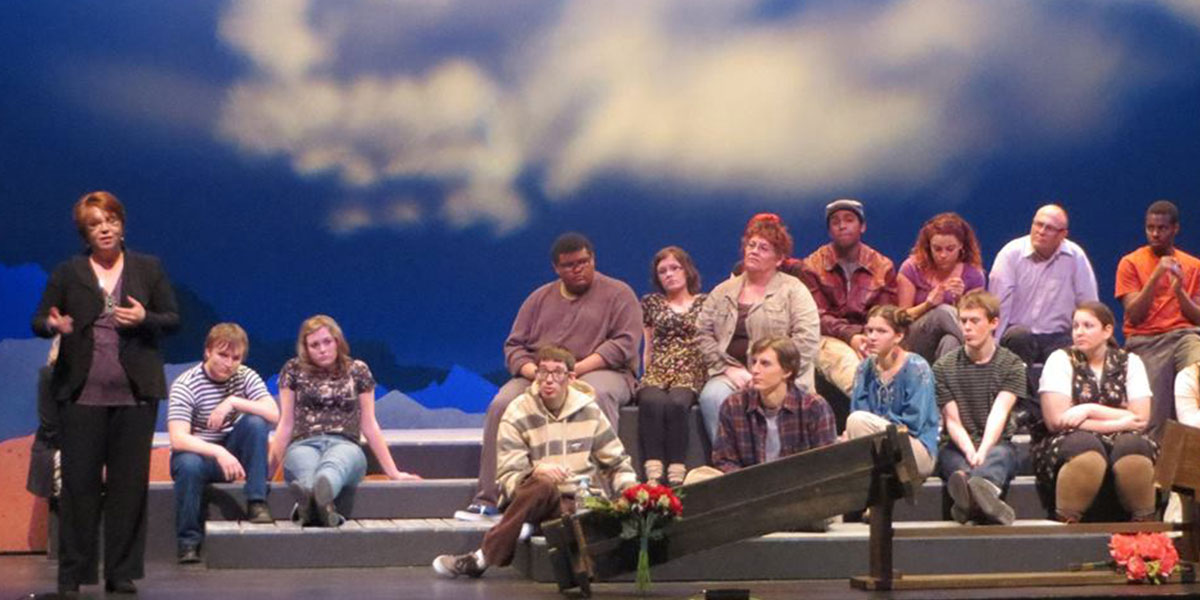 Two nights of powerful theatre and thoughtful discussion brought the story of Matthew Shepard’s murder and the aftermath of the crime to audiences in Peoria, Illinois. Susan Burk of the Matthew Shepard Foundation was a special guest for the opening of The Laramie Project and The Laramie Project: Ten Years Later at Corn Stock Theatre after working with them since before rehearsals began. The plays were created by Tectonic Theatre Project after Matthew’s brutal murder in October of 1998.  An openly gay University of Wyoming student, Matthew was beaten and left to die tied to a fence in the outskirts of Laramie, Wyoming. He died six days later.

Ms. Burk, the Foundation’s Laramie Project Specialist, facilitated post-show discussions after each performance allowing the audience and cast to share their emotions, questions, and viewpoints on the many issues raised by the shows. A 19-year-old man who identified himself as openly gay said he was offended by the lack of change and progress since Matthew was killed. “There are a lot of people that don’t want to embrace the view that we haven’t gotten anywhere,” responded Burk. She told the story of asking college class in the Boston area if they believed this crime happened because it was Laramie, Wyoming. Their reply was “Oh, yeah. That doesn’t happen here.” And although Burk said the response lead to other good discussion, it doesn’t change the facts.” It can happen anywhere,” Burk told the audience. “The thing is, is that it does.

Burk also answered questions about the work of the Matthew Shepard Foundation and shared how Judy and Dennis Shepard, the Board of Directors, and the staff engage in an ongoing discussion about needs and relevancy. “Where is the world right now and where do we fit in, and what issues do we hope to impact and how do we best do it?”

Director Tim Wyman reached out to the local schools to offer students tickets at a greatly reduced cost. Gay-Straight Alliance Groups from at least two area high schools attended the show. One group at the talk-back for The Laramie Project: Ten Years Later gave insightful and powerful comments about their experiences and perceptions about how they see the world, and their responsibility to create change in it.

As to the plays themselves, Burk had high praise for the Corn Stock productions, pointing out the enormous amount of work and dedication it takes to stage not only one, but both as full productions back to back. She also talked about how Wyman’s work with the talented cast and his skillful staging of the plays added power by integrating the actors into the audience and using of projection screens in an otherwise simple in-the-round setting.

The Matthew Shepard Foundation supports productions of The Laramie Project and The Laramie Project: Ten Years Later, which have become essential sources of education and change in communities in this country and across the world.

Susan Cunningham Burk is a theatre professional and veteran broadcast journalist. Ms. Burk is charged with leading and strengthening the Foundation’s support system for school and community productions of The Laramie Project plays, including educational materials, audience/cast post show discussions, production advice and historical context.  She provides personal insight, media, archival information, and other resources help cast members gain a personal connection to the story they are telling. Ms. Burk has strong backgrounds in theatre, journalism and Matthew’s story. At the time of Matthew Shepard’s murder, his funeral, and the trials of his killers Ms. Burk was the Executive Producer/Senior Anchor for the evening news at KTWO Television. Based in Casper, KTWO-TV was the statewide NBC affiliate, and it was Ms. Burk’s primary responsibility to arrange andimplement coverage for all of these events, including community reaction and response. She produced an award-winning news series on the filming of HBO’s production of The Laramie Project and appeared in the film, and has also acted in both of the Laramie Project plays. Ms. Burk, who was a professional actress in Chicago and other areas of the country, works in collaboration with the shows’ creators, Tectonic Theater Project.