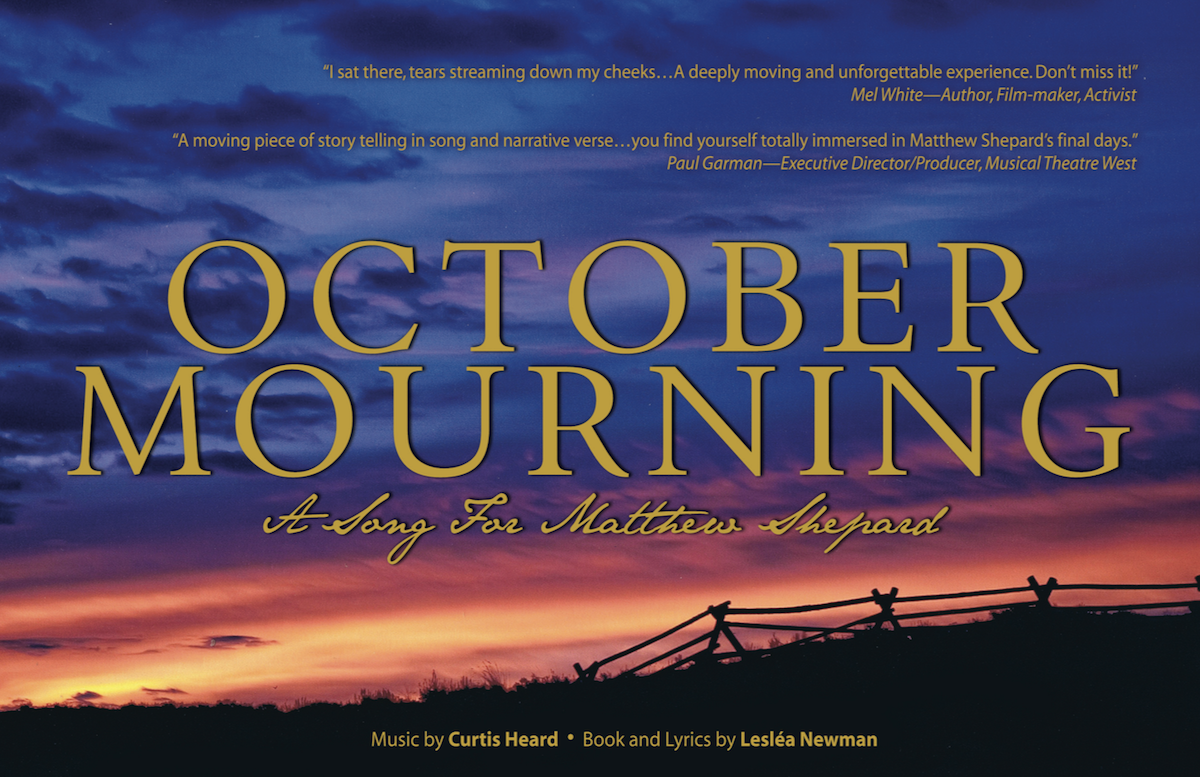 On October 17, 18 and 25 in Long Beach, California, the First Congregational Church of Long Beach (FCC-LB) will present composer Curtis Heard’s musical accompaniment to Lesléa Newman’s critically acclaimed poetry collection October Mourning: A Song for Matthew Shepard. Originally published in 2012, Newman’s poetry in October Mourning is an “exploration of the impact of Matthew Shepard’s murder on the world.”

Heard has written “a deeply moving musical score to the powerful poetry [collection],” which features a cast of more than 100 singers, actors and soloists, all accompanied by a 16-piece orchestra.  The showrunners are expecting as many as 2,200 people to see this show over the three performances.

Scott Juhl, member of the FCC-LB Board of Cultural Arts, spoke with the Matthew Shepard Foundation to share the inspiration and intended impact of this piece on the community and how it beautifully honors Matthew’s life and legacy.

MSF: How did this piece by composer Curtis Heard come about?

SJ: The genesis of the piece is a creative and talented composer, Curtis Heard. He’s also the music director for the FCC-LB, and he found himself touched by Newman’s poetry. It caused him to say “there’s a beautiful story here that I want to tell.” He took select poems from her collection October Mourning and created a choral work called by the same name to serve as a musical interpretation of her book.

The piece was originally performed in May 2014, and Newman was present for that performance. It was a bit lower scale—we had about 1,000 people who came to see it over its two-night run—but there was enough cry from those who attended for the piece to be performed again, saying “I have so many people I’d like to see it.” The reception was overwhelming.

After raising enough funds for a bigger production, and with Newman’s blessing, we’re now presenting a much larger multimedia, spoken word production. The FCC-LB, which was founded in 1886, has had a longstanding progressive mission and we look for art that reaches out and impacts our local community.

MSF: What about Matthew’s story, as told through this piece, makes it such a valuable addition to your community?

SJ: As we know, Matthew’s story isn’t a happy one. This is not a happy piece, it’s a redemptive piece. Matthew’s story is a part of our collective history, and it helps to put a face on the issues we continue to deal with today, like bullying or violence against transgender people. I think it can be hard for people to understand the extent of cyberbullying and brutal attacks against the LGBTQ+ community because it doesn’t touch them personally. With Matthew, we can put a face and heart and soul to make people understand the plight of the modern day civil rights movement, the modern day fight for trans people or anyone who is different. This performance brings out that heart and soul—Matthew’s legacy is not just about a crime, it’s about a boy, a person, who fell victim to circumstance, a circumstance we’re still seeing today.

Overall, this performance adds some humanity to the black and white of the newspaper. It’s compelling and beautiful and lovely.

MSF: What impact do you foresee this having?

SJ: We’re hoping that, as we’re talking about it and developing this show, that the younger generation will hear and understand this story, Matthew’s story. This had such a significant impact on the community, but we’re finding that it doesn’t resonate with a lot of younger people because they weren’t around when it happened. We want to put a face to these issues for those coming up in a world that’s a little better off, and this serves as a history lesson to understand the circumstances Matthew lived under, and we hope we can make this a beautiful recollection of history that people will carry with them after the show.