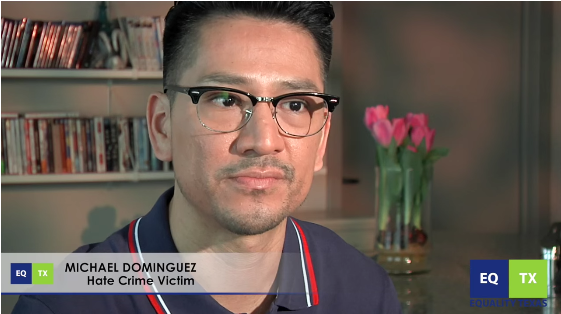 As part of its National Crime Victims’ Rights Week, Equality Texas released a video showing how the organization is working with hate crimes victims, the Dallas Police Department and other community leaders to address last fall’s spike in hate crimes in the Oak Lawn neighborhood.

Chuck Smith, CEO of Equality Texas, said: “The vitriol, sexism, racism, anti-gay and anti-Muslim rhetoric in Texas and in America is fueling an atmosphere of hate in Texas and across the country that is causing innocent Texans to be beaten and almost killed. This rhetoric is unacceptable and has real consequences for real Texans who are victims of hate crimes.”

“Indeed, Taking Back Oak Lawn is more about taking action than merely surviving. Pomerantz’s camera captures the earliest days of S.O.S. — the rallies and the push for greater police presence and more cameras and lights along Oak Lawn. The film harnesses the energy of a movement being born and growing up in a scant few months.

The urgency is palpable. Consider the timeline: Dominguez was assaulted Sept. 30. Pomerantz began filming in October. He finished shooting in January. Taking Back Oak Lawn feels ripped from the headlines. What it lacks in polish it makes up for in immediacy.”