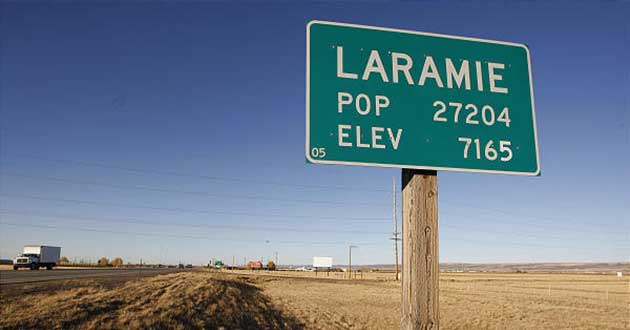 THE LARAMIE PROJECT – Call for Submissions

WE ARE NO LONGER ACCEPTING SUBMISSIONS!

The Laramie Project, a play by Moisés Kaufman and the members of Tectonic Theater Project, had its world premiere production at the Denver Center for the Performing Arts. Opening night in Denver was February 26, 2000.

This month the Matthew Shepard Foundation is celebrating the 20th anniversary of one of the most produced plays in the country, a recipient of scores of awards, and, according to the New York Times, “one of the 25 best plays of the last 25 years.” Tectonic Theater Project and the Matthew Shepard Foundation are creating a retrospective celebrating and honoring performances of the play that have impacted artists and fostered important conversations in communities around the world.

“[The Laramie Project] is a haunting portrait of a community grieving, explaining, disagreeing, apologizing, doubling down, fending off a media invasion and trying to take responsibility. The play has extraordinary power, impact and resilience.” -Jesse Green, The New York Times

SUBMIT YOUR PHOTO AND STATEMENT BY SUNDAY, FEBRUARY 23

WHO: Producers, directors, professors, teachers, and artists of theater companies, universities, schools, and community groups around the world who have produced The Laramie Project.

WHAT: One photo that best represents their production of the play;

One 100-word or less statement about why their production should be highlighted as a part of the 20th-anniversary commemoration. The statement need not explain vitals such as dates or venue information, rather it should explain why this particular production was special or notable, why it made a difference in your community, or why it impacted lives in a meaningful way.

WHERE: Send your submission electronically to media@MatthewShepard.org, Subject: 20 Years of The Laramie Project. Not every submission will receive a reply. Please be sure to send high-resolution digital photo files. In addition to the photo and your statement, tell us your name, your affiliation with the production, and the vitals about the production including producer, venue, dates of the run, and notable artists involved. If you performed a non-English translation of the play please tell us that as well.

WHEN: Submissions must be received by Sunday, February 23 at 10pm EST to be considered for publication in an internationally acclaimed media outlet.

FINE PRINT: By submitting your photo(s) to us you represent that: (i) the photo(s) is/are your original work, (ii) you have the permission of all persons depicted in the photo(s) to submit it/them and to grant us the rights described, (iii) no content owned by any other person or entity appears in the photo(s) (such as an identifiable product) and (iv) the photo does not infringe upon any third party’s proprietary or other rights. MSF, Tectonic Theater Project, and ther designees will have the unrestricted right to use, publish, reproduce, display or otherwise distribute the photo(s) however it deems fit without further approval of or payment to you.