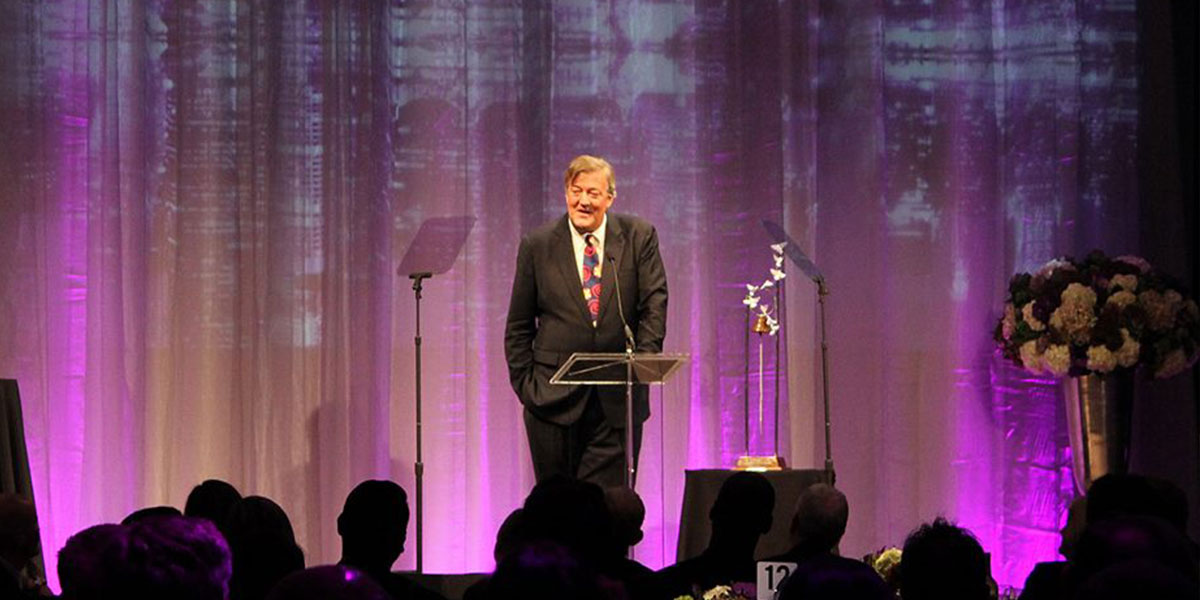 Stephen Fry to be Honored by MSF

As the Foundation passes our 15th anniversary, we owe it to the movement for LGBT equality to lift up and honor those who have committed themselves to securing justice for our community. We are excited to introduce the Matthew Shepard Foundation Honors, the new iteration of Bear to Make a Difference. Judy and Dennis care deeply about this event and share our belief that this new vision for our annual celebration reflects the maturity of the Foundation and our commitment to an enduring, sustainable movement that embraces and recognizes all contributions. We are incredibly grateful to the community that created Bear to Make a Difference 12 years ago and look forward to celebrating the future of the Matthew Shepard Foundation and honoring those who have brought us this far.

This year, it is our immense pleasure to announce that Stephen Fry will receive the Making a Difference Award. Stephen Fry is an English actor, screenwriter, author, playwright, journalist, poet, comedian, television presenter, film director and all-round national treasure.

Whilst at university, Fry became involved with the Cambridge Footlights, where he met his long-time collaborator and friend Hugh Laurie. As half of the comic double act Fry and Laurie, he co-wrote and co-starred in A Bit of Fry & Laurie, and took the role of Jeeves (with Laurie playing Wooster) in Jeeves and Wooster.

Fry’s acting roles include the lead in the film Wilde, Melchett in the BBC television series Blackadder, the titular character in the television series Kingdom, a recurring guest role as Dr. Gordon Wyatt on the crime series Bones, and as Gordon Deitrich in the dystopian thriller V for Vendetta, Mycroft Holmes in Warner’s Sherlock Holmes: A Game of Shadows and The Master of Laketown in Peter Jackson’s Hobbit trilogy. He has also written and presented several documentary series, including the Emmy Award-winning Stephen Fry: The Secret Life of the Manic Depressive, and is also the long-time host of the BBC television quiz show QI. He played Prime Minister Alistair Davies in the 9th season of Fox TV’s 24: Live Another Day.

As a proudly out gay man, the award-winning Out There, documenting the lives of lesbian, bisexual gay and transgender people around the world, is part of his thirty year advocacy of the rights of the LGBT community.

As well as his work in television, Fry has contributed columns and articles for newspapers and magazines, appears frequently on radio, reads for voice-overs and has written four novels and three volumes of autobiography: Moab Is My Washpot, The Fry Chronicles and his latest, as yet untitled.

Get your tickets today and join us as we celebrate the work of the Foundation and honor Stephen Fry.