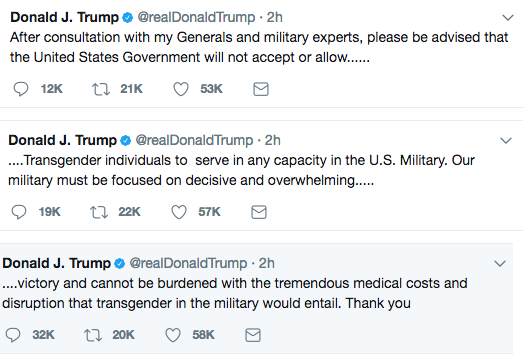 You must be as outraged as we are.

This morning, President Trump tweeted that transgender people will no longer be allowed to continue to serve, or be accepted into the military. He went on to write: “Our military must be focused on decisive and overwhelming victory and cannot be burdened with the tremendous medical costs and disruption that transgender in the military would entail.”

This is absolutely unacceptable. If it were about money, he could have simply said that the U.S. government declines to pay for gender reassignment surgeries, as was once mandated by the Obama administration. But to ban an entire sect of people from defending our country at all, “in any capacity” — as 15,000 trans people already do — is archaic and cruel. And it comes from the mouth of someone so privileged to have received five Vietnam draft deferments, who was able to, but chose not to, wear our country’s uniform in wartime.

It is bad enough that there is “debate” (as cynical as possible a misuse of the term) surrounding whether our transgender friends can use the bathroom that aligns with their gender identity, but now this? Thousands of capable and distinguished military professionals summarily ejected from our nation’s defense? Tens of thousands of spouses and dependents of trans service members losing their housing, health care and other vital benefits? We must fight back. We must contact our representatives and tell them how angry we are and how wrong this is. Click here to find out how to get in touch with yours.

While this is happening, however, we must also remain vigilant. This abrupt departure from the normal order of government procedures, in which the world’s most powerful military force is held captive to the capricious tweets of a single person, is certainly about more than it appears on the surface.

Whether it is intended to distract from the calamitous health care showdown, or to advance the administration’s clout with hard-right social radicals at the Family Research Council, we do not know. Only concerted public pressure on Congress and a vigilant watchdog free press stands any chance of producing the answers we deserve.

But we already know this: you are on the side of compassion and understanding and will continue to fight to erase hate for everyone being discriminated against. It’s just a shame that now we have to fight back against our own government.

Do you stand with us? If you can, please donate today so that we can continue this work.

Thank you for your support.