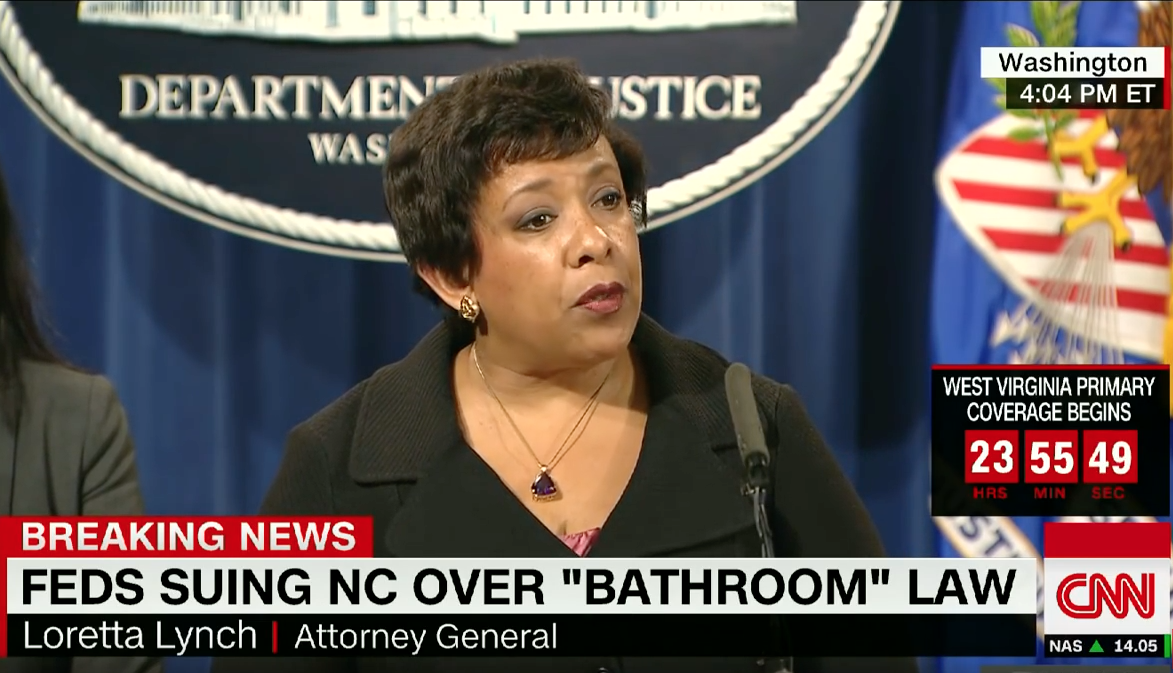 Last week America witnessed a bold and unprecedented stand for the basic dignity of the trans* community — not only with moving symbolism, but with the promise of increased federal action. On May 9, U.S. Attorney General Loretta Lynch firmly aligned the Department of Justice with equality for transgender Americans: “We see you. We stand with you … And please know that history is on your side.”

Lynch’s emotionally powerful speech drew on her North Carolina upbringing and came in response to the state’s passage of HB2, a law that would prohibit transgender people from using public facilities that coincide with their gender identity. Lynch said the law violated Title VII, a section of the Civil Rights Act of 1964 that prohibits sex discrimination. The Department of Justice (DoJ) has filed a federal civil rights lawsuit against the state.

Shortly afterward, the DoJ joined the U.S. Department of Education in releasing guidance on transgender students for schools that receive federal funding and the Obama Administration’s interpretation of Title IX, a federal civil rights law that bans discrimination on the basis of sex in education: “Schools [receiving Federal funds] have a responsibility to provide a safe and nondiscriminatory environment for all students, including transgender students.”

Here’s what you need to know:

From a Federal standpoint, it’s clear: Treating a transgender student differently than other students who share the same gender identity is discrimination.
The Obama Administration’s interpretation of Title IX includes gender identity, making discrimination against transgender citizens by an institution receiving federal funds a violation of federal civil rights laws.

This guidance does not “have the force of law,” but it is implicit in its message that violators will likely face lawsuits or loss of funding.
There is no judicial ruling (yet) on the interpretation of Title IX and whether or not it includes gender identity. But it’s clear the positions of the current administration and its cabinet agencies is unprecedented support in favor of equal rights for transgender Americans.

The fight is not over for current and future generations.
Our schools are still a battleground for civil rights for LGBTQ youth every single day. There are young people still being told they are not like their peers; that they are “others.” Even as we make great strides toward progress, we cannot give up on supporting our youth. We must continue to build up their voices.

Be aware and be involved in your community.
North Carolina’s discriminatory law is but one of more than 200 anti-gay state legislative measures that have been proposed in 2016 alone. Furthermore, almost every day one of the thousands of school districts nationwide rules on the right of a transgender student to use its facilities in keeping with his or her gender identity. The voices of fear and discrimination are wasting no time in seizing the opportunity to marginalize these youth. Some will certainly face peer rejection, experience depression and loss, or worse yet, face physical harm at the hands of others, or themselves. Will you help these young people?